One of the many disruptive qualities of the so-called industry disrupter has been a lack of transparency about its viewing figures. Unlike its competitors the main networks and cable channels, it has never been held to the same standard, never judged by ratings, choosing to keep itself separate, much to the rest of the industry’s frustration. But over time, a shift has taken place.

Slowly but surely, the streaming Goliath has started to share viewing data, usually as a brag and only when it shows Netflix in a positive light, but with each shred of information we have started to see the bigger picture. Just last week we were handed its most revealing dump to date, the 10 most popular original films and shows over the past 12 months, complete with figures for each. Although we’re still starved of the bottom end of the list and, disappointingly yet tellingly, any box-office data for its theatrical releases, we can start to see what is and isn’t working for the platform. 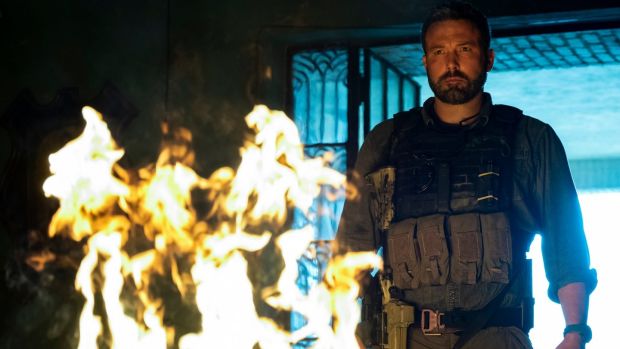 If one were to examine the top 10 theatrically released films over the past year, the upper end, if not the entire list, would be dominated by franchises, sequels and ones that don’t necessarily rely on the names involved. But on Netflix, an underdeveloped alternative to the multiplex, the biggest films more closely resemble the box-office hits of the late 1980s and early 1990s, when star appeal was prioritised over spectacle, a period that saw Rain Man, Fatal Attraction, Ghost and Three Men and a Baby win big.

The top three most-watched Netflix originals of the past 12 months – Bird Box, Murder Mystery and Triple Frontier – are all broad, crowd-pleasing films sold almost exclusively on their stars , , and , all of whom are actors who broke out in the 1990s and have fan bases that have mostly stayed loyal ever since.

The mixture of recognisable casts, substantial budgets and experienced directors means they all look like cinema releases, too, making their drops feel like mini-events to viewers who might not have been expecting their release.

Inevitably, and ironically, the films that seemed to stand against the ongoing production line of predictable sequels being churned out by the wider industry are all now being envisioned as franchise starters by those behind them. Murder Mystery 2 has been given the official green light, a follow-up to the Bird Box novel was announced earlier this year, leading many to speculate about an adaptation, while the Triple Frontier director, JC Chandor, has expressed muted interest in a quadruple. Next year also sees sequels to the previous year’s hits The Kissing Booth and To All the Boys I’ve Loved Before. 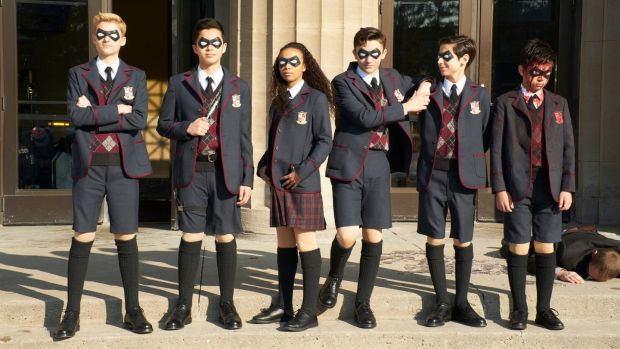 The cast of The Umbrella Academy. Photograph: Christos Kalohoridis/Netflix

By far Netflix’s biggest TV drop of the year is Stranger Things 3, with 64 million viewers – an inevitable result given the frenzy surrounding the series since it began, in 2016. But while it’s easy to equate its success to that of a big-screen sequel, especially given both its genre and how it has been marketed, what’s most interesting is that it’s one of only two shows on the list that aren’t first seasons. There’s no sign of Netflix staples such as Orange Is the New Black, Glow, Bojack Horseman, The Unbreakable Kimmy Schmidt, House of Cards, Black Mirror, The Crown, 13 Reasons Why and Mindhunter. Instead viewers have flocked to new shows such as The Umbrella Academy, You and Sex Education, all also notably aimed at a younger audience.

It’s a sign that either original shows tend to lose viewers with each season or that Netflix has been algorithmically tweaking its output to fall more closely in line with its most impassioned younger viewers. With all new shows on the list coming back for a second season, it will be interesting to see next year’s results. 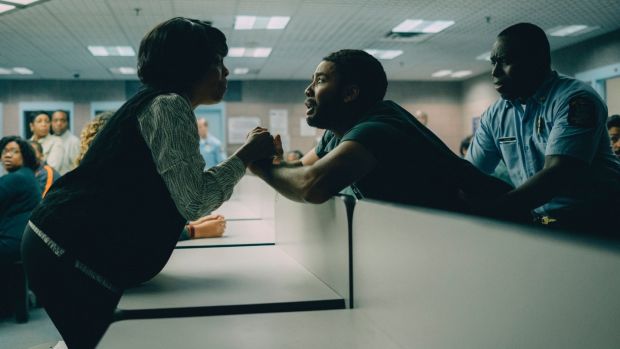 Niecy Nash and Jharrel Jerome in When They See Us. Photograph: Atsushi Nishijima/Netflix

Importantly, the lists provided don’t include content acquired by Netflix from elsewhere, which would inevitably mean that much-loved sitcoms such as Friends and The Office would make an appearance. The success of both (Netflix extended the Friends deal for one final year for $100 million before it was snapped up by HBO Max, to start in 2020) led many to believe that the practice of bingeing was mostly employed by those seeking lighter, snappier fare. But the appearance of two tough, issues-led dramas on Netflix’s TV list suggest that this might not always be the case.

Unbelievable (32 million viewers) and When They See Us (25 million viewers) have quickly shown there’s a big audience for fact-based shows dealing with difficult, timely topics. Unbelievable, a combination of a dogged crime procedural and a docudrama, focuses on rape and how it can be mishandled by authorities; When They See Us, Ava DuVernay’s Emmy-winning Central Park Five miniseries, deals with race and how it too often leads to false imprisonment. Both were eagerly consumed by viewers and critics. Expect a major awards push in time for the Golden Globes, as well as further green lights for equally tough-minded dramas. 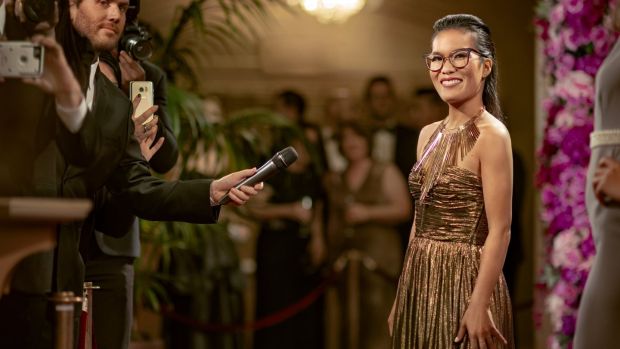 Ali Wong in Always Be My Maybe. Photograph: Ed Araquel/Netflix

Genres that have long been cast aside by Hollywood have been carefully and cleverly resuscitated by Netflix for a while now, with notable successes, such as 2018’s Summer of Love, that saw a string of smash-hit romcoms, including Set It Up, To All the Boys I’ve Loved Before and The Kissing Booth (all of which Netflix has been happy to brag about). In comparison, before Crazy Rich Asians last year, the industry hadn’t seen a $100 million romcom hit since 2011’s Just Go with It.

Apart from Otherhood, these films aren’t really star-led; their appeal is more about a tried-and-tested-and-forgotten-about formula being brought back to life. The success of the “cheerfully trashy” thriller Secret Obsession, from the long-time Hallmark and Lifetime channel director Peter Sullivan, is perhaps the most concerning, given its rote plot and flat TV-movie direction.

It’s a cheap quickie that would usually be chucked on to cable, but its large viewership on Netflix will lead to more of the same; looking ahead at their schedule, there are similarly low-rent options in the coming months. 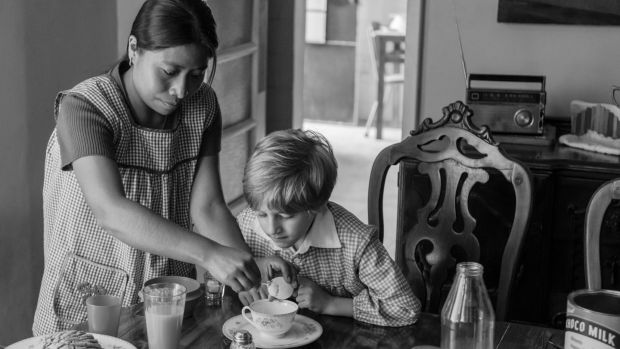 The list of most-watched films, from Bird Box down to Fyre (20 million viewers) sees a gap of 60 million viewers, meaning that while some films hit big, a great many lag far, far behind. This doesn’t make them flops per se, but it does mean that genuine phenomenons are hard to find. The list also shows that although Netflix has put a great deal of funding into both its awards push and its splashy partnerships with respected auteurs, audiences are less invested in the outcome than the company is.

The most conspicuous absence is Alfonso Cuarón’s Roma, the platform’s most critically acclaimed and awarded film to date. Netflix might have been proud to flaunt its reviews, nominations and eventual wins, but it has yet to release any solid data about its streaming viewership or its limited run at the box office.

There’s also no love for the Coen brothers and their anthology western The Ballad of Buster Scruggs, Dan Gilroy’s Sundance-premiering art-world horror Velvet Buzzsaw, the long-awaited Orson Welles drama The Other Side of the Wind, Paul Greengrass’s grim docudrama 22 July or Steven Soderbergh’s High Flying Bird. These films would have been unlikely to make the top 10 most-watched films at the cinema, either, but the film list offers a picture of a far less demanding viewer than the TV list and shows a great discrepancy in the films that Netflix chooses to promote over what viewers choose to watch.

Given the uptick in major directors who have been lured to the platform, this might not be the case in the next 12 months. Martin Scorsese’s extravagant crime saga The Irishman will surely be a rare critical and commercial crossover title, although its mammoth, 210-minute running time might prove a problem. (Netflix counts more than 70 per cent of a movie or episode as a watch.) But for those who can’t make it through, there’s a film with Kristin Davis and Rob Lowe falling in love at Christmas while caring for elephants in Zambia. So, as appears to be the Netflix mantra, there really is something for everyone. – Guardian


Netflix has revealed its most-watched content. You might be surprisedHave A Say ?Pay A Visit : Trending Story
97
spread the feeling just you've felt with :)
ShareTweet
No body is perfect, No story too, Lets Edit the Story in search of collective perfection :: a. → all Story at a.