Boris Johnson has “lost control” of the fight against Covid-19 and has no clear strategy for defeating the virus, the Labour leader, Keir Starmer, says today in his most savage attack yet on the government’s handling of the pandemic.

As the number of confirmed cases rose alarmingly yesterday, Starmer accused the prime minister of “serial incompetence”, saying the British people have been let down and left angry and confused by policies that change almost every week.

A further 12,872 people tested positive in the previous 24 hours, the government said last night, 80% more than the previous highest figure recorded. The government’s Covid-19 dashboard had showed that cases over the previous week seemed to have stopped climbing, but it admitted yesterday that a “technical issue” had led to cases being under-reported over the previous eight days. Another 49 people have died since testing positive.

Speaking to the Observer, Starmer demands that Johnson produce a new “roadmap” for dealing with the crisis within days to reassure an ever more worried British people, which must set out clearly what the approach will be until a vaccine is rolled out. “I think they’ve lost control of the virus,” Starmer says. “And I don’t want to see death rates go up. Nobody does.And the government doesn’t. I’m not suggesting that for a minute.

But this is serial incompetence. And the test, trace and isolate system was abandoned in early March if you recall because they said they didn’t have the capacity. It took them months to get back to even trying to set up a system. And they haven’t got an effective working system.”

He blames splits at the top of government and says that local councils and health officials should have been involved far more in combating outbreaks. “There isn’t a strategy. There’s a vacuum there. And that’s because there’s division in the cabinet as to which strategy they should be following.

“I’m reflecting, I think, what people in those communities feel. This deep sense of despondence, anxiety. And actually, what they want is hope.”

Starmer says people are so confused by U-turns and lack of leadership that they ask him what the government’s strategy is. “The prime minister is governing in hindsight. So he charges forward, not recognising the problem, has a car crash, looks in the rear mirror and says: ‘What’s all that about?’” 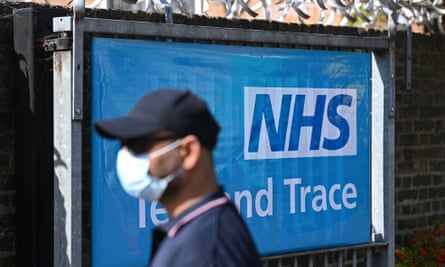 His comments mark a new low in attempts to build any form of cross-party consensus on the pandemic, and follow criticism from some on the left that Starmer has let Johnson off too lightly.

They come after a week in which the prime minister had to apologise for not understanding restrictions he had just announced across parts of the north of England. He again appeared uncertain of the rules in a series of stumbling television interviews with regional news programmes on Friday evening.

Starmer, speaking ahead of the Conservative party’s virtual conference, which opened on Saturday, demanded that the government pursue a five-point plan to fight Covid-19 that would involve:

• fixing the test and trace system by investing in NHS and university labs to expand testing, and putting local public-health teams in charge of contact-tracing in their areas

• ensuring routine regular testing for high-risk workplaces and high-transmission areas with results within 24 hours to improve infection control, including for NHS staff and carers

I’m reflecting what people in those communities feel. This deep sense of despondence, anxiety. What they want is hope

Asked if he believes there is a plan being worked on for mass vaccination, he says: “No. Well, they need to have one. Almost everything they’ve done so far, they’ve been completely slow and incompetent.”

On his strategy for making Labour electable after four successive general election defeats, Starmer says that the first phase of his leadership, after taking over from Jeremy Corbyn in April, was about recognising the scale of the task Labour faces by building trust and demonstrating that it is now under decisive, different leadership.

Although he says the task of winning back trust is far from complete and that Labour still has a “mountain to climb”, he makes clear heis now about to embark on “phase two” of his leadership – spelling out a broad vision of how he wants the country to change, and a set of core values that will determine Labour’s direction.

He says he will stand by the 10 pledges he made during his leadership campaign – many of which rested on ideas promoted by Corbyn. But, signalling the need for flexibility, he points out that the pandemic has created new challenges, which will inevitably influence Labour policies at the next general election.

Asked why he didn’t mention Corbyn by name in his recent conference speech, he is unapologetic, making clear the move was deliberate. “I named three Labour leaders. Three who won. That’s why I named them. I didn’t name anybody else.”

He downplays complaints from some in the party that he has kept his shadow cabinet team on too tight a leash, and insists that the public will hear more from them from now on.

31
spread the feeling just you've felt with :)
ShareTweet
No body is perfect, No story too, Lets Edit the Story in search of collective perfection :: a. → all Story at a.